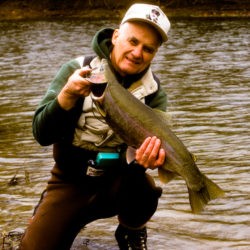 A walleye, the sainted fish of Minnesotans, does not care whether the humans fishing for it are hypothermic or not. The walleye was the Grail that drew five of us to the bleak Gull lakescape on a late October day.

Normally the temperature is in the 50s, the trees are in full fall flame, and it is sunny. It was in the 30s, the trees were stark gray skeletons, the sun was a faint memory, and it was spitting rain. Fall fishing is supposed to be hotter than a July picnic, but it was a case of, “Well, we had a great September and the fishing was really good. But it has been a goofy October.”

A variation of “You should have been here last week.”

The speaker was Glen Belgum, local guide, retired high school math teacher, and all-around good fellow who was busy putting up with me, sons Andy and Eddie, and son-in-law Ron DeValk.

Gull Lake is a 9,148-acre impoundment just a few miles north of Brainerd, Minn., with a walleye reputation. There are five public accesses and 19 resorts, including Grand View, an elegant tradition since 1919 with everything from a 27-hole golf course to a pair of hot tubs, one warm and the other suitable for a cannibal kitchen. It wasn’t the golf that I looked forward to at Grand View — it was a hot shower, but it was only mid-day and we had put in two fishless hours with more to go.

I huddled on my boat seat, blinking at the raindrops and watched the sensitive rod tip. We fished a Lindy rig, with three feet of tippet below a snap swivel, above which was a sliding weight. Belgum used a No. 4 walleye hook designed to jerk the hook into the hard mouth of the fish, rather than scraping along and possibly out of its mouth. He hooked minnows through the lips so they could swim free. “You can sometimes tell when the minnow is trying to escape a walleye — the rod tip vibrates,” he said.

Periodically, Belgum would exclaim, “I like what I’m seeing here!”

I looked around and thought, “is he crazy?” But then I realized he was seeing fish on the finder, but we weren’t seeing them in the live well.

We were fishing with large chub minnows — bigger than crappie bait, but smaller than the humongous chubs that pike anglers cherish. My minnow drooped from the hook like a hanged man. Clearly it had given up and in a way I envied it.

I pitched the defunct minnow toward the lake and a lurking gull fielded it like Willie Mays. Belgum dredged in the bait bucket and came up with a moose-sized minnow, an escapee from the pike tank. “Might as well try a big one,” he said. It couldn’t do any worse than its smaller cousins.

He pitched the baited hook overboard and I flipped the bail on the reel to let line out until it sagged as the weight hit bottom, some 30 feet down. I took up the slack, opened the bail and hooked the line on my index finger, and relaxed into my 40 layers of clothing, about six layers shy of comfort.

Then there was a subtle tick on the rod tip, an almost imperceptible pulse that varied from the rhythmic bobbing caused by wave action.

Another jiggle and I let the loose line slip from my fingertip. “Count to five and set the hook,” Belgum had said, so I mouthed the words,

“Thousand one, thousand two … ..” and at five I reeled in the slack and set the hook.

It felt like a good fish, but I once caught a rock that felt like a five-pound bass, so I didn’t whoop and holler. “I think it’s pretty good,” I said as the fish bowed the rod and made the drag squeak.

Glen manned the dip net and hauled a 24-inch walleye, biggest of the three we caught in a day’s fishing that seemed like a month. It was well above the lake’s average walleye length of just under 15 inches.

And I realized what the lodge’s name signifies. It is not the Grand View of Gull Lake, although that’s very nice. No, it is the view of that hot shower at the end of the day… .

Be sure to visit Sportsman’s Guide for a full assortment of fishing gear today.