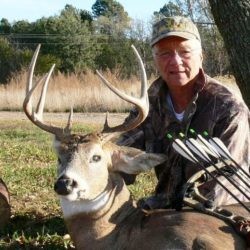 Paul M. from Michigan writes to ask about women hunters. “I hear about, read about, and see more women hunters, but are these increases real? Here is one hunter that believes that women hunting is good for all hunting. What are your thoughts?”

Some of these numbers are really amazing. Consider that female bowhunters nearly doubled, and muzzleloader hunters did double their numbers in seven years — that’s great!

The QDMA reports points out another amazing statistic. The average age of women hunters decreased from 2002 to 2009, while the average age for male hunters continued to increase.

There is another reason I like to see more women in the woods. Who does the non-hunting public relate to better from an image perspective? Men or women? The defense rests.

Make sure to check out the latest hunting gear at Sportsman’s Guide.

Dr. Dave writes a weekly column for sportsmansguide.com. Dr. Dave studied deer for 30 years as a wildlife management professor at West Virginia University. In addition he has been a bowhunter for more than 40 years, with deer being his main prey. He’s also an outdoor writer and has been with “Bowhunter” magazine for more than 31 years.