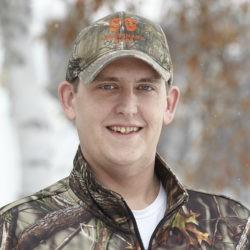 It’s actually easier than using a rod and reel, and it’s a pretty simple set-up that consists of a float line (200+ pound mono or similar), sink line (heavy cable), and a ball o back-up line. Some say that handlining connects you to the fish in a way that traditional fishing does not. And you can get some really big fish. We’ve heard stories about handliners catching 500+ pounders!

That said, blue marlin fishing with a handline can be really dangerous. You could get tangled up in the line. Or the fish could jump into the boat.

And that’s exactly what happens in today’s video.

These guys were blue marlin fishing when the handliner got a bite. He gets the fish close to the boat — and what happens next takes everybody by surprise.

The marlin leaps headlong onto the boat, nearly skewering a fisherman in the process.

The marlin’s bill —— or “kill-spear,” as we call it —— has several hundred pounds of muscle behind it. That thing could probably punch through steel. Imagine what it would do to your ribs.

Thankfully, no one was hurt.

Warning: Some NSFW language. I think I caught an f-word in there.